And Why Our Program Works. 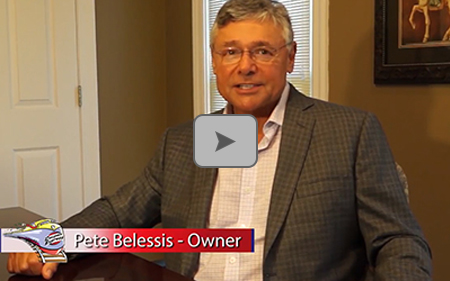 Read about our company history and meet our staff.

And Why Our Program Works.

Pete Belessis founded Mailings, Coupons & More, Inc. (MCM) in the North Alabama market in 1985. The story actually starts a of couple years earlier in Columbus, Georgia, where Pete owned a direct mail advertising franchise there before selling it to his best friend, Mike. After selling it, however, Pete realized how much he loved the industry, and so started a similar franchise business in Huntsville, Alabama. Much of MCM’s early processes and methodologies are based on what Pete learned when he was a franchisee. But when Pete saw the concepts from that franchise no longer made sense in his market, Pete became an independent business and Coupon Express, MCM’s product, was formed.

Over the years MCM grew and developed a reputation of excellence. Many of our clients have been with us for decades. What used to be an unattractive two-color product in an envelope, later evolved into a beautiful full color coupon book on gloss paper. MCM’s philosophy is to put out the absolute best product at an affordable price. We also help our clients develop the offers and approach that has the best chance of working and producing a measurable result. We pride ourselves in not cutting corners, but instead giving our clients more than they expected. That’s why we like to brag, we are the best!

The MCM team is made up of tough-minded individuals who truly care about our clients. They have expanded the business way beyond what Pete started. As Pete moves toward retirement, the MCM team will continue in that path of excellence that started so many years ago.

Pete was born in the slums of New York City to a poor dysfunctional family. At the age of seven, the police picked Pete and his younger sister, Marie, up from the street and put them in a home for kids. That’s where Pete grew up and learned about life. While this may sound like a sad story, it actually contributed to the strong person Pete later became. Not knowing what to do with his life, Pete spent 11 years in the military and is a Vietnam War veteran. While stationed in Hawaii, Pete started attending seminars and training on how to be successful in business, and in life. That positive attitude led him to his mentor, Dave, who taught Pete how to become successful in the direct mail advertising profession. Dave was tough on Pete, and most people would have quit, but not Pete! After growing up in a home for kids, and serving in the military, including a war zone, Pete was tough, ready and hungry to learn and succeed. Dave saw that in Pete, and took the time to mentor him for several years. Pete one day said to Dave, “You should write a book” and Dave said, “You’re the only one that would read it!” Dave passed away years ago, but wrote in a letter to Pete that one of the best things that happened to him over the years was meeting him, and Pete certainly shares the sentiment. Pete has one daughter, Kalia, and one granddaughter, Amelia, who he loves with all his heart. Kalia has her Master’s Degree and ABA Board certification (she’s a BCBA). She runs an autism clinic for kids in Pensacola, Florida. They are very close and Pete couldn’t be prouder! Pete’s passion is to help small businesses and friends succeed, learn and grow.

Jennifer “Jen” Massey Hill grew up on a farm in Section, Alabama, but dreamed of becoming an investigative newspaper reporter. However, a fear of interviewing people drove Jen to the design side of things instead. And she’s glad it did! Jen is a 1999 graduate of Northeast Alabama Community College; received her Bachelor’s degree in 2002 from the University of Alabama Huntsville; and received her Master’s degree in 2011, also from the University of Alabama Huntsville. Jen began at MCM as the graphic artist in 2004, and in 2010 became the General Manager, handling not only layout and design, but also office administration and some client management. Jen is married to Billy Hill. They actually grew up together, in the same town, in the same grade and on the same street, but didn’t start dating until they were 25! Together they have three very energetic fur children (cats)!

Wes is a Huntsville native, a graduate of Athens State University, and has been with MCM for over 20 years. Wes is married to his lovely wife Kelly, and together they have three children, twins (boy and girl) Kameron and Kassidy, and a 21-year-old son, Parker. They also have a grandson, Oliver, who they adore. Although two of his children graduated from Auburn University, and Kelly is a huge Auburn fan, Wes is an even bigger Alabama fan, and regularly attends home games! And, Parker is now attending Alabama, which makes Wes (and Kelly) very happy. Although it’s a house divided, somehow they all seem to make it through football season in one piece. Wes also loves to play golf in his spare time, when he’s not helping his clients grow their businesses!

Lesley is a native of Florence, AL. She previously worked for MCM for several years until her husband Bruce’s job (he’s a teacher and coach) had them traveling around the state for seven years. But, after moving houses six times, they have finally settled back in Huntsville (well, Ardmore!) and Lesley is back with MCM, and she says she is never moving again! Lesley and Bruce have two sons, Grant, who is attending Jacksonville State University, and Cole, who is a freshman at Mississippi State University, on a full ride in the baseball program. Lesley’s dad played football under Bear Bryant at the University of Alabama, so needless to say Lesley and her family are huge Alabama fans. However, now they’re learning how to say “Hail State!” Well, at least during baseball season, anyway.